Protecting NYC from storm surges - some ways will work, others won't 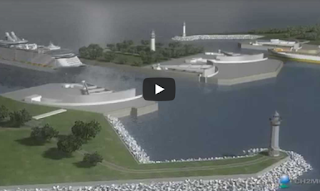 The US Army Corps of Engineers is looking at building gigantic flood barriers at  NYC harbor entrances to protect against storm surges.  It might work for a short time, but would cost at least $30-50 billion and not offer any protection from climate change driven sea level rise.  Building land-based resilience measures on our coastlines would cost only a fraction, and would address both issues.  Let's not waste billions on projects that won't work - and let's stop building in flood plains like LIC and the Rockaways.

The US Army Corps of Engineers is considering how to protect NYC from future storm surges.  They expect to narrow the list of six alternatives in their plan down to two, perhaps by winter of 2020.  We ask municipal leaders to stand with NYC Council Member Costas Constantinides, who has called the plan woefully inadequate, and its public notice insufficient.

Most of the Corp’s alternatives center on building gigantic flood barriers in the water to close off entrances to the NY harbor in the event of storms. The Corps estimates river barriers (Alternative 2) could cost up to $140 billion dollars, without counting for annual maintenance or cost overruns.  It would be difficult to modify the gates to cope with higher sea levels, and they could have a functional lifespan of as little as 20 years. And as they will remain open most of the time, these in water barriers will not address sea-level rise.

In contrast, one of the alternatives would make our shorelines more resilient by building land-based flood walls, dunes and levees.  This approach is already being taken by NYC, is supported by environmental organizations, and would address both storm surge and sea level rise. The Corps estimates this alternative would cost between $2 billion to $4 billion.  Shoreline measures can improve quality of life for waterfront communities, can be individually customized, can be modified or expanded over time, will have very small maintenance costs, and will be essential for local sea level rise protection, whether offshore barriers are built or not.

New Yorkers should be able to review Federal projects to protect our shoreline, and to reject plans likely to fail while wasting taxpayer money. We urge all Queens elected officials and Community Boards to request that the Corps extend its public comment period, schedule hearings in Queens, and to submit their own responses and resolutions.

It’s time to look more carefully at NYC’s own plans for its low-lying areas.  Climate change guarantees that sea levels will rise, as will the frequency and strength of storms, even if the details are uncertain.   Besides ensuring that the Corps helps make our shorelines more resilient, we should do our part to minimize future damage, by avoiding more construction in flood plains instead of encouraging it.
Mark Laster and Dan Miner
Co-Chairs, Forest Hills Green Team

Whereas, In 2012, coastal storm Sandy ravaged the New York City metropolitan area
causing 60 documented fatalities and damaging significant resources throughout the area; and

Whereas, As a result of Sandy New York City was left without power, with damaged
critical public and private infrastructure, and many New York City residents had limited access to food, drinking water and healthcare; and

Whereas, The storm inflicted an estimated $19 billion in damages and lost economic
activity across New York City; and

Whereas, Coastal flooding and storm surge remain a significant risk six years later and
present a threat with deadly consequences for people and wildlife; and

Whereas, The New York City metropolitan area has a gross metropolitan product of over $1.66 trillion and there was a $15 billion federal investment in post-hurricane Sandy recovery and resilience projects; and

Whereas, The Army Corps plans to address coastal risk management focus primarily on the creation of in-water surge barriers that do not address sea level rise; and

Whereas, The Army Corps feasibility study focuses on a number of options which involve the construction of large permanent in-water barriers that could result in adverse impacts to the New York and New Jersey harbor ecology while still failing to address flooding risks from sea level rise and rainfall events; and

Whereas, Sea level is rising along the East Coast of the United States faster than it has risen for the last 2,000 years, is accelerating in pace, and could rise by one to two meters this century, threatening millions of Americans with severe flooding; and

Whereas, The New York New Jersey Harbor and Tributaries Coastal Risk Management Feasibility Study does not include an evaluation of the impact of sea level rise on the study area; and

Whereas, The New York City panel on climate change has predicted that sea level will rise at least a foot by 2050 and possibly more; and

Whereas, Local environmentalists and community members and groups have voiced concerns that the Army Corps needs to conduct a more thorough review of the environmental impacts of each alternative measure and allow for more meaningful public input and participation; and

Whereas, The information provided in the study’s scope of work does not give the public sufficient ability to comment on the program design, including the frequency and duration of barrier closures, the barrier heights or the reliance on risk-based assessment, and fails to evaluate "ecosystem services;" and

Whereas, The extremely large in-water barriers and gates that will close or open for shipping fail to protect New York City and the surrounding communities against sea level rise and flooding caused by rain; and

Whereas, These huge barriers are likely to restrict the migration of striped bass, Atlantic sturgeon, herring, shad, eel and other species important to the Hudson estuary; and

Whereas, These storm surge barriers would also restrict natural flushing from the ocean and inhibit free water movement along the length of the Hudson and its estuary, causing contamination to once again be concentrated in New York Harbor; now, therefore, be it

Resolved, That the Council of the City of New York calls upon the United States Army Corps of Engineers to share information about the studies it is evaluating in this process; to evaluate "ecosystem services;" to have regular and sustained outreach to stakeholders throughout the potential impact areas in New York New Jersey, and Connecticut; and to reconsider the alternatives being evaluated in the New York – New Jersey Harbor and Tributaries Coastal Storm Risk Management Feasibility Study pursuant to the National Environmental Policy Act (NEPA) to include consideration of sea rise and flooding caused by rain in addition to storm surge.