A few weeks ago, me and the guys at Sustainable Forest Hills - Erin, Aleks and Derek - along with Peggy from the Y set up a meeting to share ideas about local food and gardening in Forest Hills, Queens.  One idea that generated a lot of excitement was putting a demonstration garden in a back yard directly behind the Y facility on 108th Street.  The Y is still figuring out what pieces of lawn we can rip up.  It's late in the season, so the goal would be to put in a mix of mature plants and fast growing seeds so we can have a credible display by the end of the season - and perhaps recruit a few other yards-to-gardens in the area.  Soil test came back with medium lead, which is apparently in the normal range.

The big back yard section, looking at the back of the Y facility, and the empty house.
From another angle.  The center of this yard is about 35' x 35'.

And from another angle.
The Y is also interested, to my surprise, of gardening on the sunny strip on the side street, which is open to full neighborhood viewing.  Great for us...
Project update, later in July: Our contact at the Y was all for this, but the boss kept delaying a decision...and delaying...finally it became clear the management did not have strong support for the project. And it was getting late in the season. And I'm overcommitted anyway. So no garden, and no plans to do one at the Y.
Posted by Dan Miner at 6:40 PM No comments: 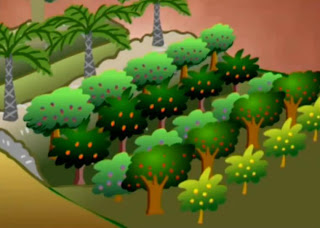 I was invited to make a presentation at the Eng Aga Eze Foundation's June 13 conference The Day of the African Child, with a focus on children in conflict zones. I expect the audience will include staff from the UN and nongovernmental organizations, and perhaps some ambassadors.  Here's a summary of my presentation and the full report, with links to the PDFs below.

Scarcity and disruption are triggering factors for conflict. High food prices caused widespread riots in 2008.  It's widely recognized that climate change, increased weather disasters, and water shortages will drive up food prices far higher, which will increase the odds of strife and conflict.

Oxfam has reported that over the last few decades, floods and storms have substantially increased.  A new Oxfam report details how hotter weather will reduce food production (leaving aside the direct effects of weather disasters). Oxfam bluntly declares the  international food system to be broken, and expects no help from nations and major organizations. They call for localized, sustainable agricultural practices.  Communities with relocalized food production will be more resilient to scarcity and disruption, and can buffer the factors that lead to conflict. This applies not just to developing countries, but right here in the US as well.

Three positive responses are detailed: a project to teach permaculture informed low input agriculture in Malawi; Geoffrey Lawton's creation of a permaculture oasis in arid Jordan, as recorded in the famous "Greening the Desert" video (spoiler alert - lots of swales); and the use of biochar as a soil amendment and climate change reversal strategy.

Buildings throughout Queens are going green this summer by going white. As part of the citywide Cool Roofs program, which mobilizes volunteers to paint roofs to reduce cooling costs, the Long Island City Business Development Corp. is creating a network of participants in the borough to join the cause. (As of June 2011, LICBDC - now LIC Partnership - had referred over twenty buildings to the program. - DM) 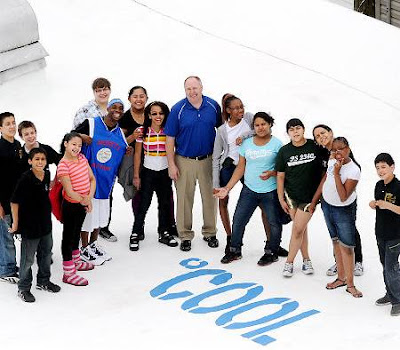 As part of the citywide Cool Roofs program, which mobilizes volunteers to paint roofs to reduce cooling costs, the Long Island City Business Development Corp. is creating a network of participants in the borough to join the cause. Variety Boys and Girls Club members stand on newly painted, energy-efficient white roof in Long Island City with club executive director Terry Hughes.


"It's good for the environment, good for the city, and it's not hard to do," said Dan Miner, senior vice president of the Long Island City Business Development Corp., which has reached out to nearly 15 buildings in Queens to connect them with Cool Roofs.


"These days everybody needs to lower their bills," Miner added.


Painting 1 million square feet of roofs white is equivalent to getting 50 cars off the road, according to Grillo. The opportunity is vast in parts of Queens, where there are a lot of large roofs.


"The outer boroughs are where we find we can make the biggest impact," Grillo said, explaining that painting it costs 45 cents per square foot and electricity usage can drop about 30% in the summer.


"It seemed like a no-brainer," said Terry Hughes, executive director of the Boys and Girls Club. "We could never afford to do something like this on our own."


The city works with corporate sponsors to make the program mostly free for nonprofit groups. Other organizations throughout Queens are setting up partnerships with the city.


"This would reduce our carbon footprint and put us in a better position to run our facilities," said Bob Osa, vice president of facilities for Goodwill Industries, which is hoping to coat roofs at its two warehouses in Astoria.


"It was very bright. I couldn't even look down," said Willie Britton, a 14-year-old member of the Boys and Girls Club who recently went atop the freshly coated roof.


Britton added that he was excited to learn that it could actually save the organization money. "It's cool. It's like a giant science project," he said.

How the Transition movement can make NYC more sustainable

New York City is certainly among the greenest of US cities.  In 2008, SustainLane ranked NYC fifth, after Portland, San Francisco, Seattle, and Chicago. In September 2006, Mayor Bloomberg established an Office of Long-Term Sustainability.   The PlaNYC 2030 report it released - with an updated version released in spring 2011 - is truly a remarkable planning document.  There are so many sustainability initiatives enumerated in the PlaNYC report that it would be tedious to list more than a few of them.  There is no doubt that the City has made great strides.

Still, much more must be done.  It is neither ungrateful, nitpicky, or petty to point this out.   On the contrary, we commend the actions of the Bloomberg Administration and the NYC Council.  After thanking them, we must resume inspiring them, and ourselves, to further effort.

It is a simple fact that despite the progress toward sustainability, much more must be done in NYC.  This is based on the science surrounding accelerating climate disruption and many other issues, and how it conflicts with the state of our politics and sociology, which slow or prevent the evolutionary changes which must take place.  The sustainability discussion in NYC must be expanded.

Toward that end, consider the Transition movement - a system of community organizing which enables decentralized, grassroots responses to climate change and peak oil.

It was developed by British community activists in 2005.  There are now over 300 Transition initiatives in the UK, Ireland, Canada, Australia, Italy and Europe. There are over 90 official US initiatives registered with Transition United States.  Activists in many other communities - including NYC - are exploring how Transition methods can step us sustainability efforts.

In an upcoming post, we'll look at Transition's twelve steps or ingredients for community organizing, and suggest effective starting points for NYC organizers.


The Transition Movement is comprised of vibrant, grassroots community initiatives that seek to build community resilience in the face of such challenges as peak oil, climate change and the economic crisis. Transition Initiatives differentiate themselves from other sustainability and "environmental" groups by seeking to mitigate these converging global crises by engaging their communities in home-grown, citizen-led education, action, and multi-stakeholder planning to increase local self reliance and resilience...read more here...
Why Transition?
We are living in an age of unprecedented change, with a number of crises converging. Climate change, global economic instability, overpopulation, erosion of community, declining biodiversity, and resource wars, have all stemmed from the availability of cheap, non-renewable fossil fuels. Global oil, gas and coal production is predicted to irreversibly decline in the next 10 to 20 years, and severe climate changes are already taking effect around the world. The coming shocks are likely to be catastrophic if we do not prepare.

"Our central survival task for the decades ahead, as individuals and as a species, must be to make a transition away from the use of fossil fuels – and to do this as peacefully, equitably, and intelligently as possible”.

The Transition movement represents one of the most promising ways of engaging people and communities to take the far-reaching actions that are required to mitigate the effects of peak oil, climate change and the economic crisis. Furthermore, these relocalization efforts are designed to result in a life that is more fulfilling, more socially connected and more equitable than the one we have today.

The Transition model is based on a loose set of real world principles and practices that have been built up over time through experimentation and observation of communities as they drive forward to reduce carbon emissions and build community resilience. Underpinning the model is a recognition of the following:

The Transition Movement believes that is up to us in our local communities to step into a leadership position on this situation. We need to start working now to mitigate the interrelated effects of peak oil, climate change, and the economic crisis, before it is too late. Together we can make a difference. ...read more here...
Check out this video put together by Ben Zolno on 'Why Transition?':
Posted by Dan Miner at 3:47 PM No comments: