Urban agriculture to Con Ed and back again 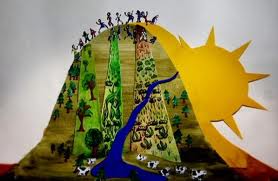 What have I been up to since my last blog post in the spring? Finishing my new report, “Engaging Community Groups to Promote Energy Efficiency, Solar Power and Local Agriculture.”

The report has been cooking for a long time. Wondering how to connect activists inspired by Occupy Wall Street with sustainability issues and the practical concerns of earning a living in economically precarious times, I wrote an article, published in winter of 2012 - "Occupy sustainability: the 1% is blocking the transition to a renewable energy economy."  That led to an invitation to organize a panel discussion about at the Brooklyn Food Coalition conference last May, to explore economic opportunity from urban agriculture.

I kicked off the panel by having retired US DOE nuclear physicist Al Cavallo provide an intro to peak oil, and how permanently depleting fuel oil supplies would make long distance transportation of food increasingly more costly. Regionalizing our food supply becomes not just a good idea, but an inevitable outcome of geological and economic constraints.  I don't hear anyone talking about fuel depletion within the NYC food community, or NYC's other progressive, environmental and policy communities, so... somebody's got to do it.

Panelists included Stacey Murphy of BK Farmyards, Tanya Fields from The BLK Projek, Noah Leff, a maker of trendy Brooklyn chicken coops (he brought his chickens);  Matt Hatoun of Wholeshare, a food distribution service.  Someone from East NY Farms talked about their share table.  ENYF runs several community farms and markets, and aggregates produce grown by individual gardeners within the neighborhood sold on consignment at a share table.  Sales go mostly to the contributing gardeners and some to ENYF.  A rep from Feedback Farms talked about their water conserving, portable sub-irrigated planters.  Greg Todd shared his proposal for neighborhood entrepreneurs collecting food waste using industrial bicycles, and composting them at decentralized neighborhood locations.

I set about turning the notes into a report. It proved more complicated than I thought, and doesn't lend itself well to visuals. Since this post needs an image, I'm adding an especially colofrul one from "Crisis of Civilization," an excellent documentary.


What was a common thread? The possibility that community based nonprofits could use their ability to connect with their contacts to promote sustainability initiatives.  The catch is, they won't do it for free.  Would it be possible to craft projects that could earn such nonprofits some income, which would encourage them to promote the green initiative?

1.  Con Edison's Green Team energy efficiency upgrade program gives businesses big incentives to become more energy efficient and save money.  When our staff promoted it, we had a dramatically higher rate of businesses using the program than when they were contacted by a Con Ed contractor with no ties to the neighborhood.  Other groups could certainly get similar results - if they had a financial incentive.  Which will lead to the Con Ed campaign, but hold that thought...

2.  We promoted solar PV systems in Long Island City, and connected building owners with our pre-screened group of solar installers.  Because of our referral agreement with those installers, we earned fees when two projects were built.  It's not easy but hopefully will get easier over time.  Any group could do this now.  Our referral agreement is available on request.

3.  NYC CoolRoofs.  I was an early advocate of painting roofs white to keep them cooler in summer, for lower AC use and electric bills, pushing the project both through Sierra Club, and at LICP.  I wrote a user's guide about the program, and referred about 20 buildings, mostly nonprofits in western Queens, to NYC CoolRoofs.  What I learned was that because the savings in lower electric bills are almost always much smaller than the cost of paint, even after City incentives, the program is virtually impossible to sell.  It's a bust.  Doesn't work.

If a sustainability project can deliver on several counts, it can be appealing enough so people will take part on their own.  Lacking one or more, only idealists will do it, unless people are forced by law and the threat of city fines.

Con Ed does not provide a referral fee for nonprofits promoting their program, as LICP did very successfully.  But if it did, many nonprofits would be drawn in search of referral fees, from getting their constituents to lower their energy bills.  Which is why I'm asking elected officials and civic groups to sign onto the request that Con Ed provide such referral fees.  Since Con Ed is very unlikely to start offering such fees just on my suggestion, I'm waiting until I assemble a critical mass of supporting groups before formally making the request.

I need your help.  Can you please give me the contact information for nonprofits or community groups who might be interested, or forward them the following request?

(You're probably wondering what happened to creating local jobs through neighborhood agriculture, and whether there's any way to incentivize community groups to promote it.  If you don't want to wait until the next blog post, read the report.  But first - the Con Ed campaign.)

The following proposal can engage many NYC community-based nonprofits in promoting energy efficiency retrofits, lowering energy bills for their constituents while earning some income for themselves. I’m seeking community boards, elected officials and civic groups willing to sign on.

The proposal: Con Ed should offer all nonprofits an incentive for referrals leading to residential or commercial Green Team upgrades. We believe that if Con Ed did this, participation in the program would soar. This would lower energy bills for many New Yorkers, reduce strain on the City electric grid, reduce consumption of fossil fuels, and recruit many NYC nonprofits as grassroots ambassadors for sustainability efforts.

NYC civic groups that support this concept are invited to complete and return this sign-on letter, or just reply by email. Note that signatories are not binding themselves to do or say anything further. http://www.beyondoilnyc.org/Con-Ed-referral-fee-proposal-BONYC-10-12.pdf

Because community-based nonprofits can reach out to neighbors and networks of close relationships, they can be very effective marketing partners in sustainability projects. The key is to craft projects in which everyone comes out ahead. The prospect of income for themselves as well as service to constituents will give these groups the incentive to get involved, bringing new allies to sustainability efforts.

My new report outlines three such possible projects – and one specific proposal.* Two projects are based on the successful programs of a Queens business nonprofit.

1. Of the nonprofit’s constituents referred for free Con Edison energy efficiency surveys, the number that went on to purchase recommended upgrades was triple the citywide average ratio, and much higher than the ratio for area survey recipients contacted only through Con Ed contractors. This demonstrates the value of relationship-based referrals, and leads to the proposal.

2. After developing referral fee agreements with solar installers (available on request), the group’s outreach led to the installation of two solar PV systems. Any group can now use this program in its community.

3. Transition to a more local food system is important for the City’s long-term sustainability. The third section of the report explores how combining innovative urban farming techniques and new business models already being used in NYC can enable nonprofit groups - especially those serving low-income communities - to earn income for themselves and their constituents from farming in backyards, vacant lots and rooftops in their community.

The proposal: that Con Ed offer all nonprofits an incentive for referrals leading to residential or commercial Green Team upgrades. Civic groups that support this concept are invited to complete and return this sign-on letter, or just reply by email. Note that signatories are not binding themselves to do or say anything further.