This is the second part of a report on a urban agriculture workshop using Growing Power's integrated system of greenhouses, fish tanks, worm bins and composting.  Thanks again to photojournalist Murray Cox for use of his photos.

Growing Power uses worms to create fertilizer used in their hoop house garden beds, and to make worm compost for sale.  Read about it here. During the workshop, some worms from one of the Mission's existing bins were transferred into a new bin. 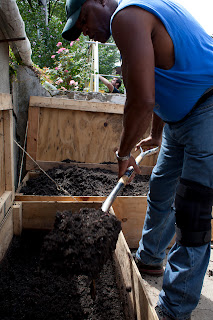 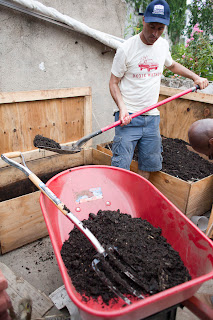 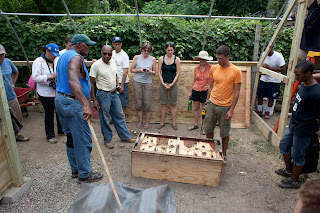 This is not your home-scale worm bin in a plastic tub. (This past year I've been using such a bin, with much frustration. I'm now planning to return to taking compostables to a drop-off site. Sigh.)  Next step is adding layers of compost, and layers of brown - dried plant matter - as well as worms. 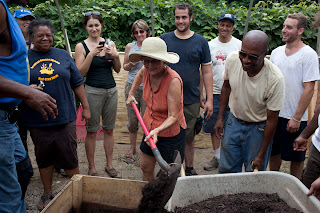 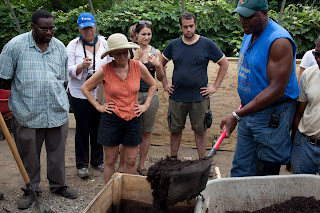 It was an honor to hear directly from Will Allen about how urban communities are using these techniques to raise food locally and be more self-sufficient. 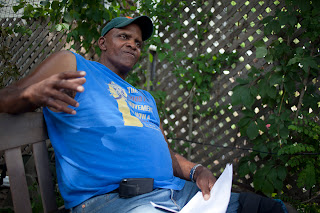 There were lots of interesting conversations with other attendees at the workshop about how to promote urban agriculture in NYC.

In a previous post, I set out a proposal for increasing public participation in sustainability initiatives and PlaNYC.   What if we could set up a series of brainstorming meetings in which subject matter experts in sustainability intiatives get together with MBA types and those skilled in developing business models?

Might they be able to figure out ways for neighborhood groups, civic associations, and faith groups to make money for themselves while implementing sustainability initiatives?   One way of structuring those meetings would be the World Cafe method, but as part of the approach, I'm inviting people who see some possibility here to suggest better ways to organize it.  It's open source, so please look at the post and add your comments - or suggestions on how to improve it - below.  Thanks!
Posted by Dan Miner at 8:27 AM