For PlaNYC, the City's long term sustainability program, to survive and grow, public support for it must be increased before the next Mayoral election.   Getting many more New Yorkers directly involved in sustainability initiatives is a good way to do that.  Rather than targeting individuals, why not aim to effectively engage civic groups?  Here's a proposal for public-private collaborations to identify ways for civic groups to earn new sources of revenue through sustainability projects - while broadening the support for sustainability urgently needed in NYC.  We can do it - with your help. 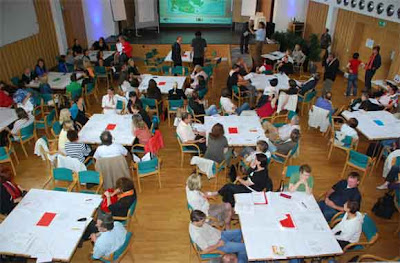 
Central to the City’s sustainability efforts is PlaNYC, the monumental program linking hundreds of greening initiatives across City operations. Yet how sustainable is PlaNYC itself? As a project of the Mayor’s Office, it was created almost completely by government agency staff and consultants. The public wasn’t involved in creating the plan, so no grassroots constituency or broad public support ever developed around it. The limitation of this strategy was quickly revealed when in 2007 PlaNYC aimed to stabilize mass transit funding and reduce traffic congestion by setting up fees for driving into Manhattan’s business districts. Vehement opposition quickly overwhelmed the initiative. Now, in its 2011 update, PlaNYC officials claim a strong commitment to public engagement. It’s not just pleasant rhetoric: building public support for PlaNYC before the 2013 Mayoral election may be the single most important initiative of them all.

In tough economic times, even the most sensible long-term priorities are at risk from budget cuts, especially for a Mayoral project like PlaNYC, without a permanent official role in City government. Unless the next Mayor has a strong sustainability commitment or constituency, the project is likely to fall from its current high priority. PlaNYC could quickly become a shadow of its former self.

One proposal to assure that PlaNYC continues would amend the City Charter to make PlaNYC into a permanent civic body run jointly by the Mayor and other elected officials, while developing a public planning process to guide its implementation, but logical reasons to support PlaNYC don’t offer strong enough motivation to work. Financial incentives, either through future savings or avoiding future costs, seem to work better. From the failure of the 2007 congestion pricing campaign, we’ve learned that the carrot of secure mass transit funding was too abstract and impersonal to trigger broad public support, but the stick of paying higher fees killed support. On the other hand, some sustainability programs that promise future savings are finding customers. Con Edison is offering free energy efficiency assessments, and 70% off retail price for upgrades. Government incentives now pay as much as 80% of the cost of solar power systems. If participation in even these programs depends on hefty incentives, ad campaigns, and the hard work of salaried outreach staff, is it realistic to expect New Yorkers to spontaneously self-organize neighborhood greening projects through PlaNYC’s new Change By Us social media platform?

How can NYC civic groups find sources of revenue from PlaNYC initiatives?

There are thousands of civic groups in NYC without any current environmental agenda. Despite their diversity, members of business organizations, social service nonprofits, faith groups, and senior centers will all want to know “What’s in it for me?” If we can figure out ways for civic groups to make a buck from implementing sustainability practices, we can engage the public.

Bringing together sustainability experts and entrepreneurs to crowd-source business consulting

Organizations central to sustainability initiative sectors - such as solar power, green buildings, or urban agriculture - could co-sponsor an evening or half-day event.  Invited attendees would be practitioners in the field, members of NYC business and entrepreneurial groups, and leaders of civic groups.

It would start with a panel of experts, to brief attendees on products and practices the sector now offers.  Panelists would also discuss the opportunities and obstacles in marketing the sector - what has and hasn't worked.

The general meeting would then break into small discussion groups using the World Cafe method of conducting meetings.  Participants at each table would brainstorm ways that civic groups could offer value and earn revenue while promoting the sustainability products or practices just reviewed.

Here's an introduction to the World Cafe method. After welcomes and introductions, groups of any size break up into small groups sitting around tables for a round of 20 minutes. Each round is prefaced with a question for the context and purpose of the setting. One member of the group volunteers to be the reporter, and take notes of the table's responses to the question. At the end of the 20 minute round, the reporters from each table take turns sharing their small group's deliberations with the larger group. If there is a second round, everyone except the reporter would then go to another table and the process repeats. After the meeting, notes are summarized and shared via email with all participants. The notes from each meeting will be posted on websites of co-sponsors so the combined insights of many diverse NYC groups and networks will be conveniently available.

The cost of setting up such events won't be that high - compared to the potential benefit from crowd-sourcing business consulting for sustainability practices.  If such meetings produce ways for civic groups to promote sustainability initiatives, while lessening their reliance on foundation grants, private donations, and government incentives, wouldn't this be a worthwhile experiment?

Entrepreneurial solutions might include civics earning referral fees for getting neighbors to sign up for installing solar photovoltaic and hot water systems or building energy management systems, or performing energy efficiency retrofits.  It could be identifying green micro-enterprises that civics could promote to their constituents. Or compiling portfolios of potential business plans for neighborhood-scale enterprises.

The prospect of financial gain is necessary but not sufficient. Are there social movements whose narratives or techniques might support PlaNYC? Sustainable Flatbush and the Lower East Side Ecology Center, neighborhood environmental groups cited in PlaNYC, are good models but depend on dedicated staff and funding. Some groups are great at bringing together volunteers, like 350.org for climate change activists and United for Action for opponents of natural gas hydrofracking, but are too narrow in their appeal and lack a local focus. Groups affiliated with the environmental justice movement focus on providing low-income and minority communities with equal protection from environmental burdens, but lack broad appeal. All of these groups have some but not all of the features necessary.

Transition and Bright Neighbor may be better social organizing models for New York City. Started in Britain just a few years ago, the Transition method of grassroots organizing is now being used in hundreds of communities around the world. Volunteer-led talks or documentary screenings show how current economic worries, higher energy prices and climate change are all connected. Volunteers set up local brainstorming sessions, where neighbors meet, envision how their community can become more resilient and sustainable in the future, and create local projects to implement that vision.

Both Transition and Bright Neighbor build support for their programs by talking about mitigating the effects of future energy prices increases. While fuel depletion is not widely discussed, last year the International Energy Agency admitted that world conventional oil production peaked in 2006 and the cover story of July’s Popular Science magazine is “The Last Drops: How to Bridge the Gap between Oil and Green Energy.” So far, however, the Regional Plan Association is the only major New York City group to venture a comment on how this will affect policies, even though places like Portland, Oregon and San Francisco, California have already issued municipal reports on adapting to both fuel price volatility and climate change.

Next steps for PlaNYC - a laboratory for entrepreneurship and social movements


Let's recap. We must raise public participation in PlaNYC before the 2013 election to ensure that the City’s sustainability projects are themselves sustainable. PlaNYC could gain a vast amount of leverage by recruiting the City’s vast number of civic groups, but that won’t happen by good intentions alone.  How can we develop more financial support for public engagement in challenging economic times?  If just 1% of the City’s business, social sciences and marketing experts started thinking about the City’s sustainability initiatives, who knows what innovation could result! Citizens who recognize what’s at stake can develop entrepreneurial ways for civic groups to profit from promoting sustainability and better narratives and organizing tools to make PlaNYC a permanent part of the City’s culture. It’s time for that 1% to step forward, and convene the laboratories for social movements that PlaNYC will need not just to thrive, but to expand.
Posted by Dan Miner at 5:45 PM