Charcoal is produced when biomass is heated in the absence of oxygen, which prevents it from bursting into flame and burning up.  Charcoal produced specifically to be used as a soil amendment is called biochar - which can be beneficial for plants, and is also a low-tech, low-cost way to capture carbon and store it in the soil. 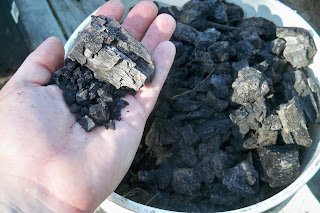 This was a widespread practice throughout the Amazon region before the Europeans arrived, as layers of unusually dark and fertile soils with high charcoal content attest.  Scientific study of biochar has surged due to its potential importance in carbon sequestration. 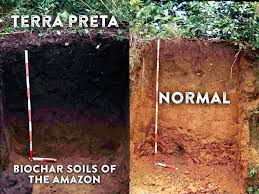 Ordinarily, the carbon in wood, plant materials or manure is released into the air as carbon dioxide when the material decomposes or is burnt in a fire. When biomass is turned to charcoal, the carbon becomes extremely stable and won’t reenter the atmosphere for a thousand years, maybe longer.

As you know, climate change is accelerating.  NASA just announced the first six months of 2016 were the hottest ever recorded. So a closer look at biochar and its climate regenerating potential is very timely.

In July 2016 I traveled to the Eco-Village Training Center in Summertown, Tennessee, to meet with its director Albert Bates, author of The Biochar Solution. See my previous post on the visit here.
One day, Albert, I and John went for a ride, stopping for lunch buffet at a Chinese restaurant.  (Pondering how convenient it is that there are Chinese restaurants everywhere, I did a little looking and found that there are apparently over 45,000 Chinese restaurants in the US, more than the number of all the McDonald’s, KFCs, Pizza Huts, Taco Bells and Wendy’s combined.)

That was the weekend of the truck attack in Nice, France and the attempted coup in Turkey. Albert is concerned about cyber terrorism, and is reading Richard Clarke’s book on the subject. We recalled how in the early 2000s, observers of the converging crises in environment, economy and natural resources were certain that major disruptions were imminent, and are still perplexed that business as usual has continued.  The massive digital money printing after the 2008 financial crisis certainly helped.  How long can the current superficially stable state of affairs continue? We can’t really tell.

Albert had two observations.  One is that the stability of the economic / political system depends on public confidence, and disruptions large enough to make the public lose that confidence could pop bubbles and trigger unknown consequences.  The other parallels the Heisenberg uncertainty principle, which tells us that physicists can know the speed or position of a subatomic particle but not both. We’re operating in a very complex world system. So the more we know about a particular dynamic in society, the more we risk over-focusing that and less likely we can predict with accuracy how that particular issue will play out, and when. 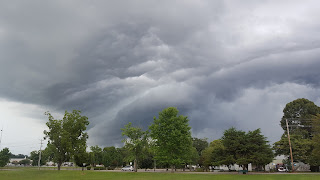 On the way we saw very ominous clouds and stopped to look.   It didn’t get close or turn into a tornado, but easily could have. Tennessee is one of the states in the US where tornadoes commonly occur.

But back to carbon management and biochar.  Whether you’re in Tennessee, Mexico or NYC there are still opportunities most people are not aware of to better manage our resources and safely store carbon in the soil.

One of the high carbon materials mentioned in the last post is the solid organic matter left over at the end of the sewage treatment process, sometimes called biosolids.

It explains that biosolids may be used as fertilizers or soil conditioners spread on parkland, farmland, lawns, golf courses, cemeteries and landfills, and that NYC has long term contracts with companies to manage the biosolids.

The City’s 2006 Solid Waste Management Plan and its Biosolids Management appendix partly address how those biosolids are used.  The vendors and their details have certainly changed since then. 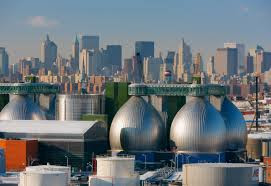 The numbers are going to be big.  NYC produces 1,200 tons per day of biosolids. Until it was legally prohibited in 1988, the City was dumping them in the ocean.

While methane is always produced in the anaerobic phase of sewage treatment, as well as in the decomposition of waste in landfills, NYC is making a particular effort to collect methane from the Newtown Creek sewage treatment plant.

Each of its eight gigantic steel digester eggs holds millions of gallons of sewage waste.  Held at a steady 98 F in the absence of oxygen, bacteria are digesting the waste and producing gas.  Here’s a closer look into Newtown Creek’s operation.

Methane has about 25 times the greenhouse gas effect as carbon dioxide, so capturing and burning it to produce electricity offers environmental as well as financial benefit.

The One NYC Plan’s 2016 Progress Report reaffirms the administration’s goals of reducing the City’s carbon emissions 80% by 2050 from 2005 levels.   Most of the City’s energy use is centered on heating, cooling and lighting of buildings.  However upgrading composting, anaerobically digesting organic waste, and capturing methane from wastewater treatment are also prioritized (p. 112).

Turning sewage digester gas into electricity at several of the City’s wastewater treatment plants was set out in the original 2015 One NYC Plan (p. 171). The Administration aims to reduce the amount of solid waste disposed of by the City 90% from its 2005 level by 2030, partly by expanding organics collection and processing (p. 176, 179). “…The City will also explore options to beneficially use biosolids resulting from the processing of organic waste at WWTPs…”

Perhaps sewage biosolids, food waste and other waste flows can make a much larger contribution to the City’s carbon emission reduction goals than has been anticipated so far by sequestering some of them as biochar?

When Mayor de Blasio raised the City’s carbon emission target from the Bloomberg era 30% by 2030 to 80% by 2050, the goal didn’t come out of a vacuum. A number of cities around the world had already put that figure out as their goals. In 2013, the Mayor’s Office of Long Term Planning reported on how a new goal of 80 by 50 could be met.

The report focuses on reducing energy use or greenhouse gas emissions, but does not seem to recognize or address the potential for direct carbon sequestration.

The solid waste section, starting at p. 99, notes that whatever cannot be composted or recycled is taken to waste-to energy facilities outside of the city or to transfer stations in the city that coordinate delivery to landfills as far away as Virginia and South Carolina. Could some of that waste flow, such as the wood component of construction waste, be sorted out for turning into biochar?

Graphs on pages 102-03 give more insight into the City’s residential, commercial and construction waste flows and their destinations as of 2011.

Some questions about potential biochar production in NYC


The City’s organic waste flows are about to get even bigger.

NYC is now requiring food service businesses above a certain size to collect organic wastes. Food and yard waste makes up about a third of the solid waste from the City’s businesses. The businesses or a private carter they hire must either compost or anaerobically digest the waste.


Any feedback on these questions, or additional questions that need to be addressed, would be greatly appreciated. Thanks!

Pictures of Dan's visit to the EcoVillage Training Center on Facebook.
Posted by Dan Miner at 7:13 AM