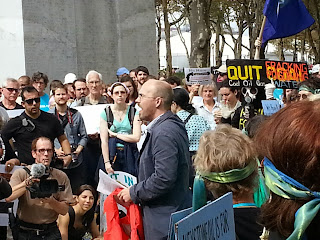 The Keystone XL Pipeline project would bring oil extracted from Canadian tar sands down south through the US.

In the 20th century we had ever-expanding supplies of oil that was easy and inexpensive to extract.  With the easy oil already discovered and steadily being depleted, the new
sources that remain are mostly unconventional oil and natural gas, which are very difficult, costly and polluting to extract.

That includes natural gas hydrofracked from tight shale deposits, deepwater and polar oil, or the Canadian tar sands.  The carbon emissions from especially dirty sources like the tar sands is expected to accelerate climate change.

Funding and developing the project infrastructure makes it inevitable that the carbon from these deposits will find their way to the Earth's atmosphere.  NASA physicist James Hansen calls it a 'carbon bomb.'

Here's a two minute video from 350 describing the Keystone and their response.

Then see this brilliant short video from 350 that puts the entire project in context.

350.org declared Sat., Sept. 21 a national day of action. Hundreds gathered at NYC's Battery Park for a rally against the pipeline, emceed by the very capable Peter Rugh, previously the leader of the Occupy Wall Street Environmental Solidarity working group.

Bill Hewitt, an environmental writer and activist, spoke of how clean energy sources have the capacity to supply our power needs. 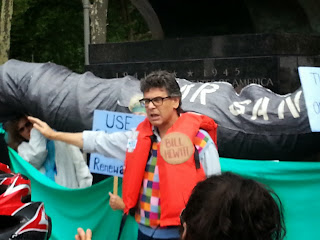 Cecil Corbin-Mark from WEACT urged the crowd to call Governor Cuomo and ask him to put a moratorium on fracking - and talked about the jobs that would be created from wind power. 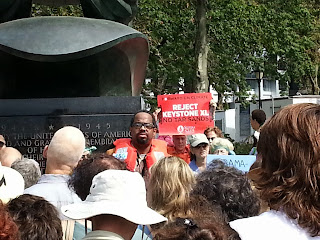 While this was going on, Clare Donahue from Sane Energy Project gave me a stack of flyers for Global Frackdown, a Sat. October 19 rally sponsored by many groups.  (It'll take place on Pier 62, the Chelsea Piers, on 23rd St. and the Hudson River, from 11 AM - 3 PM.) I made myself useful and passed them out.  Meanwhile Pete led the crowd in some chants, and revved them up for taking the pipeline to the South Street seaport.

Are events like this enough? No, they're not enough but they're what we have today.  The few hundred people at this rally, and at rallies around the country, as small and hidden from mainstream media coverage as they are, still have an important role in keeping Obama from completely caving to fossil fuel interests.

We need to get more New Yorkers involved in climate change response beyond this tiny choir.  But how? The film screenings/events I'm organizing are one small contribution toward that end.  Compare the extraordinary challenges we face and the limited resources we have to make them, and one cannot help but feel daunted.

Yes, wind and solar could meet all of our electricity needs - potentially.  350 and other groups like them understand the positive messaging needed to convey a sense that a desirable energy future is viable and possible.  Going into detail about the less glamorous and indeed grimmer aspects of this discussion is off message, and best saved for private conversations among activists.  If you're reading this blog, congratulations! You've gone far off the beaten path.  For the general public it's best to focus on the positive possibilities, after briefly touring the dark scenarios.

For a closer look, read "Searching for a Miracle: Net Energy Limits and the Fate of Industrial Society," a 2009 report from Richard Heinberg and Post Carbon Institute.  Yes, there's a lot of sun and wind to be turned into renewable power.  And installed solar and wind power capacity is increasing very rapidly...but...they still represent only a tiny fraction of the world's energy mix.  And virtually all our transportation infrastructure runs on liquid conventional fuels.  How much money, time and political will is there to convert all our cars, trucks and trains to renewable power sourcing?  And will that take place before production from conventional oil sources, now on a bumpy plateau because of the supplementation from unconventional sources, finally begins depleting substantially?  Our energy future is likely to be much more austere and volatile than the official messaging from either 350, Post Carbon Institute or myself would lead the new listener to expect - but that's not likely to help newcomers get their feet wet and get involved.

But what about those who've looked deeper into the abyss?As David Roberts of Grist recently wrote, given what we know of upward trending carbon dioxide levels and the radical economic and social changes needed to put the brakes on climate change, the big question is - "is there any hope? Or are we just f*cked?"  He answers with the most helpful, and possibly the most realistic analysis I've come across lately.  Never mind just the link: here's the essay. Hope you find it helpful...

Over the last 10 years, I’ve been asked one question more than any other: Is there any hope? Or are we just f*cked?
Regular readers could be forgiven for concluding that we are, indeed, f*cked. On one side, we have the brutal logic of climate change, about which I wrote:

If there is to be any hope of avoiding civilization-threatening climate disruption, the U.S. and other nations must act immediately and aggressively on an unprecedented scale.