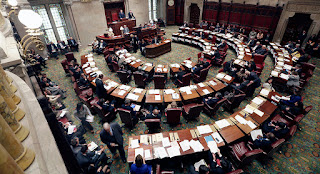 With climate change accelerating and Federal government policy in full reverse, it’s urgent for city and state governments to take the lead on climate change, environmental and energy policy.  Despite being one of the bluest states, New York State, and its government, could be doing much more.  Here’s an example.

The NY State Energy Plan, released in 2015, sets positive goals for 2030: reduce greenhouse gas emissions within NY State by 40%, have 50% of electricity come from renewable sources, and cut energy consumption in buildings by a quarter.  While an important roadmap, with detailed policy recommendations, there’s a serious problem with the plan - its goals are only aspirational.  NYS government agencies and officials are not legally required to put them into practice.

The Climate and Community Protection Act (CCPA) is critically needed to fix this.  The CCPA is backed by NY Renews, a coalition of 110 labor, community and environmental groups.  It was drafted by climate law experts at the Sabin Center for Environmental Law at Columbia University, and then reviewed and refined by the policy staff of the coalition member groups.

According to Jessica Wentz of the Sabin Center: “With the Trump administration working to dismantle federal climate protections, it is essential for states and cities to take action to address climate change. The Climate and Community Protection Act is an ambitious piece of legislation that would make New York State a leader in U.S. efforts to reduce greenhouse gas emissions and adapt to climate change. It creates a comprehensive and legally enforceable framework for meeting emission reduction goals, decarbonizing the state economy, and preparing communities for the impacts of climate change.” 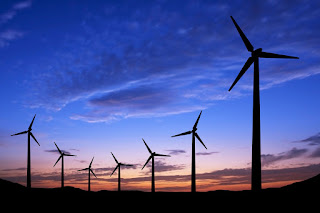 The CCPA would legally require NY State government to enforce its climate commitments. The law would authorize funds for new renewable energy projects, mandate the formation and reporting activities of a 25 member NY State Climate Action Council, require the DEC to set new regulations, and require that the State get 50% of its electricity from clean, renewable energy sources by 2030.

The CCPA would also complement the NY State Energy Plan in other ways.  It would set new labor standards and worker protections for those in the renewable energy industries. It would allocate 40% of the budgets for projects in the State’s Clean Energy Fund to disadvantaged communities, making them more resilient to extreme weather events such as Hurricane Sandy, and also making green job training more widely available. 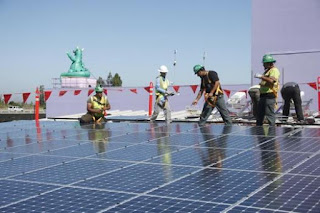 Assemblyman Steve Englebright, chair of the Environmental Committee, introduced a bill to write the CCPA into law in the New York State Assembly; it passed in both in 2016 and 2017.  For a bill to become State law, a companion bill must also be passed by the State Senate.  Last year, the Senate didn’t even make an effort to consider the proposed law.

On June 1, Donald Trump made the historically destructive decision to withdraw the U.S. from the Paris Climate Agreement. One might hope that in the aftermath, with the need for state leadership on climate change never clearer, New York State would finally pass the CCPA, which had been sitting on the legislative docket for over a year.

Senator Tony Avella of Queens and all 8 members of the Independent Democratic Conference – the group of 8 Senators elected as Democrats who now vote with the Republicans – signed on as co-sponsors of the bill. They introduced it into the Senate on June 19, near the end of the 2017 session.

Instead of pushing the Senate’s Republican leadership to bring the bill up for an immediate vote, Sen. Avella suddenly took a 180 degree turn, claiming profound misgivings about the bill and deciding to shelve it until further study. 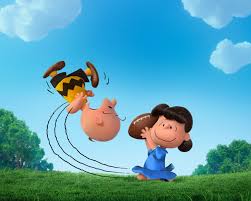 Originally, the bill was supported by all eight members of the IDC, self-described “pragmatic progressives” who claim to be able to work with Republican leaders to pass progressive priorities.   But apparently, this was only for show; the real plan was to sit on the bill and block action.

The IDC’s support for Republicans gives the latter majority control of the Senate.  Combined, these Senators are the single biggest obstacle to passing ambitious climate legislation in New York State. Avella’s manipulation of the CCPA demonstrates standard IDC practice -- the IDC is a pack of con artists in service of the Senate’s Trump-aligned Republicans.

As the IDC’s excuse for burying the bill it had just agreed to sponsor, its members point to a letter from three individuals denouncing the bill and questioning its provisions - a remarkably weak claim given the bill's broad support by labor, community and environmental groups.

Their delay and deception during this time of climate crisis is unconscionable. The only way the IDC can prove that its endorsement of the CCPA wasn’t a cynical scam is to pass the legislation as soon as possible, by including it in their next conference budget proposal.
= = = = = = =
A closer look at Avella’s CCPA con game

In late June 2017, after signing on as a sponsor of the CCPA, Avella suddenly reversed himself and announced plans to block action on the bill until after completely reexamining it at a forum to be held in the fall of 2018.  The forum would only feature testimony from witnesses invited by Avella.  Supposedly, the reason for the IDC’s complete reversal on the bill was a letter Avella received - dated June 19.  Three people signed off on a nine page letter with a laundry list of criticisms of the CCPA. They clearly had it ready and were awaiting the precise final day to send it. Its release was nicely timed to provide the IDC a threadbare excuse to delay action. 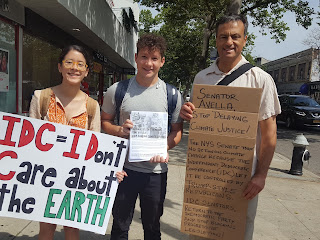 At a rally in front of Senator Avella’s office later in June, Avella’s chief of staff Rebecca Sheehan attempted to explain to activists how Avella and the IDC did a complete turnaround in less than two weeks. Sheehan wrote:
"As I informed you yesterday, given the serious issues raised in the June 19th letter he received, Senator Avella has decided to hold a "Climate Forum" sometime this Fall to hear public testimony from experts on these issues, including environmental justice professionals, labor representatives and climate science professionals so that a full throated discussion can be had about any concerns with the current language of the bill, how those can be addressed and the best way to ensure that this legislation is drafted and moved forward to meet its intended goals.  It is Senator Avella's intention to have this hearing open to the public, although testimony will be by invitation only, and he hopes it will also be available to be "live streamed".  "
There is no end of technical and procedural objections that can be made toward any plan, especially when the scope of the challenge is as large as moving New York State from fossil fuel to renewable energy as quickly as possible.  The letter is an exercise in the generation of objections.  It should not be taken seriously.
If the IDC were serious about improving the bill they could have scheduled hearings in the fall of 2016 and winter of 2017.
Before it momentarily met with the approval of the IDC, the CCPA had already been crafted with the input of experts on environmental and climate issues, as well as environmental justice and labor advocates, through the participation of over 100 groups representing tens of thousands of New Yorkers.  For Avella to ignore the participants and process that led to the bill and claim it needs to be rewritten, ostensibly based on criticisms from three individuals, is implausible, arrogant and condescending.
The forum being discussed may not even take place.  Even if it did, with testimony only from those that Avella invites, the forum would just be a charade designed to delay action indefinitely, propose legislation entirely at odds with the advocates of the CCPA, create confusion, and demand endless research into unresolvable conundrums that no one is assigned to fund or evaluate. Avella’s response cannot be taken seriously.  It is a scam.
Sheehan handed activists a statement from IDC Director of Communications Candice Giove that was surprisingly open in its contempt for environmentalists and confident in the gullibility of voters:
“It’s disappointing that these protesters senselessly killed trees to create misleading placards since the members of the IDC are fighting to protect our environment.  We are working with climate science experts to strengthen the recently introduced Climate and Communities Protection Act so that New York can act as an example for other states in the face of federal failure.  And, we proudly passed the Community Risk and Resiliency Act that makes our state monitor climate change risk such as sea level rise, flooding and storm surges, and use data to predict extreme weather.  This major law included investments in environmental infrastructure projects to revitalize waterfronts, clean up coastlines and protect farmland.  It also included revolving funds to address water pollution and drinking water concerns.  The members of the IDC are committed to combating climate change and will continue to fight for this issue.”