Sustainability questions for proposed residential projects - and the future of retrofits 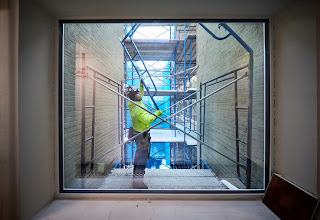 Several members of the Forest Hills Green Team also serve on Queens Community Board 6.  Community Boards are entitled by City law to interview developers of proposed residential projects, and pass their approval or disapproval within NYC government decision making processes. It's a great opportunity to put developers on the spot, and officially inquire how energy efficient or sustainable their proposed buildings are.


Since non-experts can only guess what the right questions are to ask, I sought advice from experts.  First, here's some background.

There have recently been major changes in NYC laws governing the energy use of buildings, which accounts for the majority of the City’s energy use.  The City passed Local Law 97 in 2019 to reduce carbon emissions from buildings, with emission caps on most buildings larger than 25,000 square feet.  That will cover about 50,000 residential and commercial properties out of over 1 million buildings in NYC.

The law doesn't spell out exactly how each building should meet those limits.  Instead, it sets emission intensity limits (metric tons of CO2 equivalent per square foot) for ten building categories. Building operators start with their  energy use, which is already measured and collected through the City's energy use benchmarking law. A simple first step is training building staff on energy efficient operating procedures. Next is performing an audit of energy efficiency improvements and equipment upgrades, and carrying them out. The city’s Retrofit Accelerator is a free program for building owners who need assistance with their project.

These caps will start in 2024 and will become stricter over time, eventually reducing emissions 80% by 2050. It is widely recognized as the most ambitious building emissions legislation enacted by any city in the world.

And here are questions shared by Chris Halfnight, the Associate Director of Policy for Urban Green Council, that Community Board members, or any concerned citizen, can pose for any new project in NYC.


And here are some Urban Green resources you might find helpful:

So that's a look at what the new standards will mean for new buildings.

What will these new standards mean to NYC's existing stock of residential buildings? Many of our buildings are quite old. 90% of the buildings in NYC today will still be standing in 2050.  Of the roughly 50,000 buildings larger than 25,000 square feet that will have to comply with the extremely strict Local Law 97, many will be older residential buildings.  Retrofitting them to never before imagined energy efficiency standards is literally an experimental project.

One of their projects is Casa Pasiva, now transforming 9 aging buildings in Bushwick, Brooklyn - without tenants needing to relocate.  Interior pipes, radiators and heating ducts will be removed or sealed, and a new facade on each building will cover a new all-electric heating and cooling system.

This new airtight white facade - layered up to 8 inches thick on top of the existing brick and concrete exterior - will help slash energy costs by 80%.  It will consist of a barrier to prevent air flow, rigid insulation panels, stucco, and a self-cleaning finish designed to repel water by mimicking lotus leaves.  The project will meet the Passive House standard.

I was not surprised to learn that the visionary architect behind the project is Ms. Chris Benedict, who I met a few years ago in the course of various environmental volunteer projects.  Expect to hear more about Casa Pasiva.  Now imagine it's 2030, and your apartment building has been upgraded with a new 8 inch thick exterior facade... 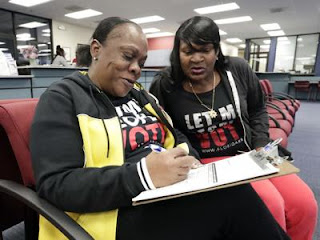 
The Biden and Trump campaigns are focusing on Florida, the state so evenly divided that elections are often won by a few thousand or even a few hundred votes.

It was a big setback when in September a Federal appeals court dominated by Trump nominees ruled that over 700,000 former felons, many of whom lean Democratic, would not be able to vote unless they paid all their court fees.

In 2019, Florida voters passed an amendment to the state constitution that restored voting rights to those with felony convictions who had completed “all terms” of their sentences.  The Republican state legislature decided that “all terms” also requires payment of fines and fees, overturning the will of the voters.

Their decision was initially struck down in Federal court.  A judge found that the overwhelming majority of former felons would be too poor to pay the amounts owed, if they could find out what they owed, saying that the law had created an “administrative nightmare” and was effectively an unconstitutional tax on voting. The amount of fees, and the completion of their payments, can only be determined by officials of the county in which the violations have occurred.  That’s the system that the Federal appeals court just reaffirmed.

Fortunately, returning citizens can turn to the Florida Rights Restoration Coalition to navigate this process.  FRRC has also taken donations of $3 million so far to help them pay off fines.

Of the total number of Florida’s returning citizens at least 85,000 have already registered to vote.   It’s unclear how much fines those citizens owe, or the procedures for paying off a majority of them rapidly. Since most such fees are considered unlikely to be paid off, county officials may be open to negotiation for part payment of back fees, according to the Fines and Fees Justice Center.  A $5 or $10 million donation to FRRC right now could be pivotal to the presidential race.  It’s a hypothetical question until a large donor contacts FRRC.

There are quite a few extremely wealthy Americans who could easily put that up, but the most likely candidate is Michael Bloomberg.

Forbes magazine ranked him as one of the richest people in the world, with a net worth of $60 billion.  Tom Steyer, whose presidential campaign also folded quickly, has a net worth of only $1.6 billion.  Bloomberg could donate Steyer’s entire net worth to 2020 campaigns and would hardly notice it.

Bloomberg spent $935 million dollars of his own money on his brief presidential run.  That sum exceeded the $748 million Barack Obama raised from donors in the 2008 election. After he ended his campaign, Democrats were relieved to hear him promise a “massive spending blitz,”  in which he would donate whatever it took to beat Trump.

As of late July, Bloomberg had given $18 million to the Democratic National Committee and $11 million to the House Majority PAC.  He had also spent $331 million on efforts to combat Covid-19.

In August he pledged $60 million more to Democratic House races. In September, he committed to spending $100 million to the Biden campaign in Florida.  These recent donations are laudable, but insufficient. Given our dire circumstances and Bloomberg’s immense resources, we urge him to step up his support for Democratic campaigns immediately.

On September 17, the Miami Herald Editorial Board agreed, calling Bloomberg the last hope for these potential voters, as October 5 is the last day to register. ("Write a big old check, Mr. Bloomberg, and help Florida's ex-felons vote in November.")
https://www.miamiherald.com/article245797425.html

On September 21, the New York Times published an op ed, "This is How Bloomberg Can Help Biden Win Florida," with the same request.


Mr. Bloomberg, please contact FRRC and determine how best to pay the fees and secure the voting rights for the largest number of Florida’s returning citizens in time for this election.

And next, please make good on your promise to donate whatever it takes to beat Trump. Your investments are at risk. All the previous good works of Bloomberg Philanthropies - on the arts, education, the environment, good government, and public health – will be in dire peril unless Democrats take the White House and Senate.  At stake is America remaining a nation of laws, not an authoritarian regime, and our capacity to respond to the virus and the climate crisis.  Everything is on the line.  Please do as much as you can right now.

“Bloomberg Vowed to Spend Whatever It Takes to Beat Trump. Democrats Are Still Waiting,” NPR, https://www.npr.org/2020/07/29/896545732/bloomberg-vowed-to-spend-whatever-it-takes-to-beat-trump-dems-are-still-waiting

“Bloomberg Philanthropies Unveil Website and Priorities,” Chronicle of Philanthropy, https://www.philanthropy.com/article/Bloomberg-Philanthropies/154947
Posted by Dan Miner at 8:40 AM No comments:

(Here's my pitch to the Sierra Club NY State Chapter leadership. We'll see if anyone writes back.)

While early July polling shows that Biden has a lead over Trump in many states, it would be extremely dangerous to assume that Biden’s victory is assured.  Don’t forget that Republicans are certainly planning to cheat in many ways (see links below).  It’s of crucial importance that Democratic candidates win by large enough margins, ideally landslides, to overcome dirty tricks.  Obviously, a Trump re-election would be apocalyptic.  All environmentalists and progressives should put their current campaigns on hold, put aside any complacency, and immediately join existing get out the vote efforts.

Fortunately for Sierra Club chapters and members, there is an excellent electoral campaign already up and running through Sierra Club Independent Action.  I have personally been volunteering through their texting program.  Phone calling and letter writing are also available at sc.org/gotv. The SCIA plan includes supporting all 64 Sierra Club chapters across the country as they work to elect pro-climate candidates up and down the ballot. After the election, the organizing and new volunteers recruited will pivot toward advocacy.
https://www.sierraclubindependentaction.org/2020-plan-to-win

I urge the Atlantic Chapter to recognize that we are in a five-alarm fire state of emergency, immediately coordinate with National staff, and recruit all Sierra Club members and friends in the Chapter to plug in to the SCIA electoral campaign.  An Atlantic Chapter effort could tip tight state races from red to blue this November.  Looking forward, this organizing could recruit new members and expand chapter conservation efforts.  I look forward to your reply.