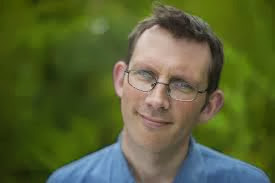 In 2005 UK environmentalist Rob Hopkins created a unique organizing method to catalyze community level responses to climate change, as he set up what would be the first Transition initiative in the town of Totnes, England.  Hopkins co-founded the Transition Network in 2007 to train others in its application, and went on to write three books about it: The Transition Handbook, The Transition Companion, and The Power of Just Doing Stuff.  Along the way he won many awards, and earned a PhD from the University of Plymouth.   In October 2013, Hopkins toured the US, visiting New Orleans, Boston, Portland Maine, NYC, Houston, Austin, San Francisco and Milwaukee.

Although there are now 1,400 Transition initiatives in 44 countries, it's not because Hopkins has been spreading the word in person.  He hasn't flown since seeing "An Inconvenient Truth" in 2006.  But after seeing the 2013 documentary Chasing Ice, and the recent passing of carbon dioxide to over 400 parts per million in the atmosphere, he decided he couldn't refuse an invitation to speak to US funders about the power of local action to address our ecological and economic crises.  We had a rare and perhaps unique opportunity to hear him in person when he spoke to a small group at NYC's Municipal Arts Society. 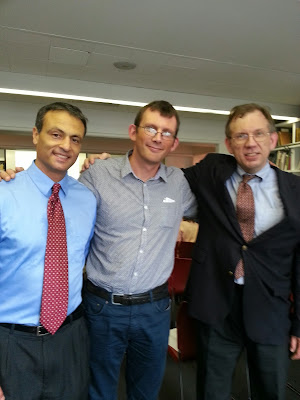 Hopkins opened his presentation with a picture of a storefront in the village of Belcoo in County Fermanagh, Northern Ireland.  Attendees of the G8 economic summit drove through it en route to their conference center.   Like many retail spaces in Belcoo, it's actually vacant - but was covered over with large stickers to make the area look occupied and prosperous. 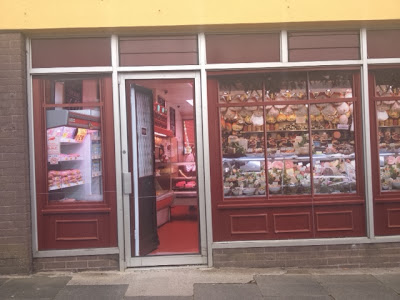 From a distance, window stickers look like a thriving business.

"It reflects a sense that while we feel things around us changing rapidly, as a culture we find it easier to put stickers on windows and pretend everything is alright.  However, many people want to do something about it."  Transition attempts to respond to four challenges.


There's no cavalry coming to our rescue, so even though national and international responses are needed, we can't wait for them.  While there's a lot that can be done about these predicaments by individuals and through government action, there's a great deal of untapped potential from mobilizing those around us.  What would a community response to the end of the age of cheap energy look like?  That vision is the missing element that Transition brings.  It can lead to making what is now politically impossible become the politically inevitable.

Transition initiatives are different in small towns, suburbs and major metropolitan areas.  They start with organizers raising awareness about these challenges, finding allies and building networks.  Then, projects emerge organically as participants find out what resonates with others in their community. 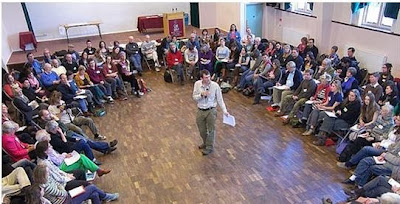 Demonstration projects help people believe they can accomplish things with their neighbors, and catalyze even more projects.  There's a network of people around the world who are doing this, acting as social change R and D units. Successful and easily replicable ideas can be spread through the networks.

The Transition Streets project offers a template and workbook for several neighbors willing to get together every few weeks to make easy changes to how they use energy, water, food, packaging and transportation.  Participants reduce their carbon emissions, but more importantly make new local connections.

"The future can be what we want it to be.  We are brilliant, imaginative and bold.  But there are limits.  Limits to the amount of carbon dioxide our climate can handle, to the amount of energy available to us, and the degree to which economic growth is still possible.  I believe we need to apply our brilliance to designing within those limits, and we can do it.  Around the world, people are already seeing these limits as opportunities.  They aren't waiting for permission, they're coming together to create stronger and happier communities, more resilient and viable economies, and taking their power back at the same time.  It's the power of just doing stuff, and I think it's one of the biggest ideas of our time.  It's about getting on and doing stuff - here, now, today.  Visionary, practical, and meaningful stuff.  You can start small but meaningful, and it can grow.  In Kilburn, London, a local group has created the first edible garden on top of an underground station.  In Slaithwaite, in Yorkshire, the community rescued the local greengrocer, creating a catalyst for the economic regeneration of the town.  In Fujino, Japan, they created their own electric company, which has since inspired another forty communities across Japan to do the same thing.  In Bristol, in the southwest of England, they set up their own complementary currency, the Bristol pound, which can be spent in hundreds of local independent businesses.  The city's mayor even takes his full salary in them.  All of this can be done anywhere.  When enough places do it, it starts to change our sense of what's possible."
- Rob Hopkins, in a two minute video for the book "The Power of Just Doing Stuff." 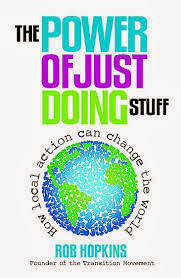 Transition movement organizers are cultivating a learning network, so people aren't always reinventing the wheel, with national hubs supporting local initiatives, providing groups the support, training and resources they need to be as effective as possible.

Local economic development creates a virtuous circle.  Local businesses recognize natural limits, have low carbon outputs, build local resilience, and are operated not just for profit but to bring assets into community ownership.  "The economies of scale for local economy enterprises will be even more positive when oil is $170 a barrel," Hopkins added.

While Transition provides the most comprehensive analysis and organizing approach, many groups such as BALLE, Slow Food, and Slow Money are working on the issue of localizing business. Business Alliance for Local Living Economies (BALLE) provides an extensive collection of resources, including reports, webinars, and manuals.

Transition UK's economic development strategy is to stimulate entrepreneurial ventures in three areas: local food production, energy conservation retrofit services and renewable energy generation.  They have produced reports quantifying current and potential spending in these sectors, as applied to a rural county, a small town and an inner city London neighborhood, and outlining next steps.

Comparable reports have been prepared for the NYC food system.  Both Manhattan Borough President Stringer’s FoodNYC report and Council Speaker Quinn’s FoodWorks Plan emphasized the economic benefits of buying more of NYC's food needs from within NY State and the metropolitan region.

"The new economy in 20 enterprises" presents case studies of the UK’s top twenty ‘Transition oriented’ social enterprises, chosen because they meet basic needs of food, energy, transportation and housing, needed in every locality. They show that viable business models - the building blocks for a re-localized economy - already exist and are highly replicable, whether in the UK or the US, concluded Hopkins.  "You don't need someone from England to come over and give you permission to do Transition - but if you do, you just got it."

Video of Rob Hopkins at Tufts University, October 9, 2013.
What is Transition?

"Transition is a community-led response to climate change and shrinking supplies of cheap energy, building resilience and happiness. It is an idea about the future, an optimistic, practical idea. It is self-organizing and people-led, supporting the creation of communities that are more resilient, entrepreneurial, connected, equitable and engaged. And it's fun."  - Transition Network
Why Transition?

We are living in an age of unprecedented change, with a number of crises converging. Climate change, global economic instability, overpopulation, erosion of community, declining biodiversity, and resource wars, have all stemmed from the availability of cheap, non-renewable fossil fuels. Global oil, gas and coal production is predicted to irreversibly decline in the next 10 to 20 years, and severe climate changes are already taking effect around the world. The coming shocks are likely to be catastrophic if we do not prepare.

The guiding principles of Transition
The twelve ingredients of the Transition model
In Rob's 2009 TED Talk, he explained that we have to transition beyond fossil fuels not just because of climate change, but because the inexpensive oil our civilization has been built to operate on is now steadily running out.  We can use our creativity to come up with new ways to operate but it must be based on a realistic sense of where we are. There are four stories we can adopt.  One is that we can keep on with business as usual.  Another is that we'll hit the wall, and we're so fragile everything will collapse.  A third is that technology can solve everything, and we'll just invent ourselves ways out of these predicaments. The fourth - the transition response - raises awareness about those challenges so they can be addressed directly, and encourages self-organizing local projects.